LONDON, England (CNN), worm that spreads through low security networks, memory sticks, and PCs without the latest security updates is posing a growing threat to users.

The malicious program, known as Conficker, Downadup, or Kido was first discovered in October 2008.

Although Microsoft released a patch, it has gone on to infect 3.5m machines.

Experts warn this figure could be far higher and say users should have up-to-date anti-virus software and install Microsoft’s MS08-067 patch. 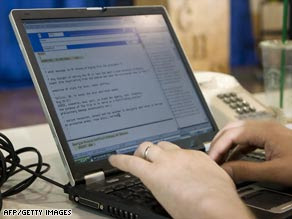 How serious is it?

It is the most serious large scale worm outbreak we have seen in recent years because of how widespread it is, but it is not very serious in terms of what it does. So far it doesn’t try to steal personal information or credit card details.

We have large infections in Europe, the United States and in Asia. It is a Windows worm and almost all the cases are corporate networks. There are very few reports of independent home computers affected.

What does it do?

It is a complicated worm most likely engineered by a group of people who have spent time making it very complicated to analyze and remove. The real reason why they have created it is hard to say right now, but we do know how it replicates.

How does it spread?

The worm does not spread over email or the Web. However if an infected laptop is connected to your corporate network, it will immediately scan the network looking for machines to infect. These will be machines that have not installed a patch from Microsoft known as MS08-067. The worm will also scan company networks trying to guess your password, trying hundreds and hundreds of common words. If it gets in, even if you are not at your machine, it will infect and begin spreading to other servers. A third method of spreading is via USB data sticks.

How can I prevent it infecting my machine?

The best way is to get the patch and install it company-wide. The second way is password security. Use long, difficult passwords — particularly for administrators who cannot afford to be locked out of the machines they will have to fix.

What can I do if it has already infected?

Machines can be disinfected. The problem is for companies with thousands of infected machines, which can become re-infected from just one computer even as they are being cleared.
By Barry Neild, CNN